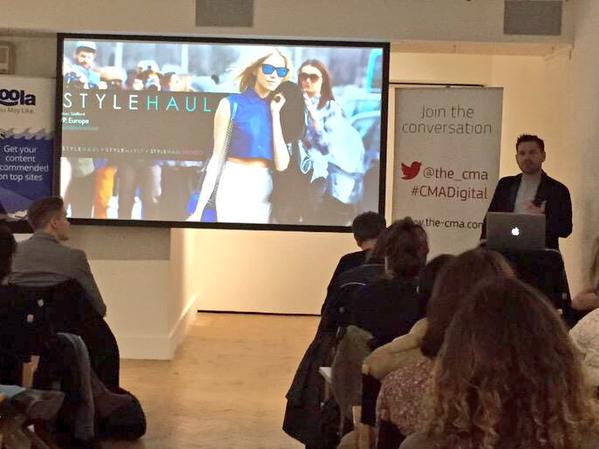 This week I hosted the March Digital Breakfast for the Content Marketing Association. The theme was Bloggers, Vloggers and social media personalities.

It was a packed house at TCO London in Shoreditch. For the first time we had standing room at the back to accommodate all who wanted to attend.

This shows a high level of interest right now in the phenomenon of self-starting YouTubers and other social media stars who have built their own audiences. Many have deeply engaged subscribers in their thousands and even millions.

Clearly video is already a massive medium online. As Siobhan Freegard, Founder of Netmums and Channel Mum, pointed out, there’s over 500 years of video watched on Facebook every day (gasp). And what’s more startling is that 79% of internet traffic is forecast to be video content by 2018.

So-called millennials love the medium, and many turn to YouTube first for their information and inspiration. James Stafford VP of Europe at Stylehaul believes that a big part of this is about ‘super-serving the under-served’. How many great fashion shows do you see on TV? On YouTube there is a lot of great content in this and many other niches, from people with a passion for their subject.

A big part of the appeal for audiences is not aspiration but the personal connection.

Nic Yeeles, previously Brand Director at Simon Cowells’ You Generation (The UK’s largest YouTube channel) and now founder of Peg.co, says that the platforms in this world are not the traditional ‘media channels’, but the personalities themselves. He advised any brands that want to work with vloggers to avoid trying to dictate to them, and instead approach them as collaborators.

One of the things that came through most clearly was that people often think in terms of reach, but in this world it’s relevance and engagement that’s more important. Nic Yeeles advises focusing less on subscriber numbers and more on consistency of video views when looking at vloggers to work with.

For more snippets, check out the hashtag #cmadigital on Twitter.

Next month we’ll be looking at the state of search engine marketing and where it’s going next. If you’re interested in attending, please download the booking form at the bottom of this page: CMA Digital Breakfasts.