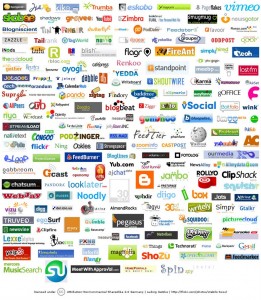 ‘Society is held together by communication and information.’ So said Samuel Johnson back in the 18th Century.

Here in the 21st Century Johnson’s words are even more apt. New online social media tools like Twitter, Facebook and Friendfeed are merging information and communication through simple and easy-to-use interfaces.

Information: Social media provides users with instantaneous information about what’s going on in the world, indeed quicker than through any other medium. No wonder many people who previously used news websites, RSS feed readers and other content aggregators to track information online are now often using just Twitter instead. This has been given even more traction through the emerging power of real-time search.

But how are we to cope with the massive increase in information and communication?  Back in May 2008 ReadWriteWeb complained of too many choices and too much content – a year later and the situation’s worse than ever.

We are experiencing the white heat of change in communication and information, and it’s not just technology but society itself that is changing. Just as Samuel Johnson would have predicted back in the 1770s.