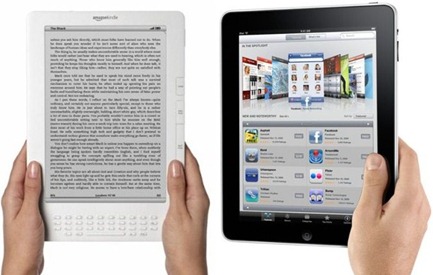 Yesterday Amazon announced its latest quarterly financial results. One of the highlights was the news that ebooks for the Kindle are now outselling paperback books.

Since the beginning of the year Amazon has sold 115 ebooks for every 100 paperbacks sold. This is a remarkable turnaround, and one that has come a lot sooner than industry watchers expected.

Contrast this with the less than stellar performance of magazines in digital format. While iPad sales are soaring, iPad magazine sales are dropping dramatically.

So how come books are faring better on digital devices than magazines?

It’s too early to say for sure, but I have a theory that it’s all about simplicity.

Magazine interfaces on digital devices have mostly been far from intuitive. Compare magazine apps on the iPad and you’ll find a wide variety of different approaches. Each has different page and section layouts (some scroll vertically, some horizontally), broad variations in the user interface and often complex multimedia integration.

Usability specialist Jakob Nielsen concludes that iPad user experience problems are caused by an overly strong print metaphor and weird interaction styles. This will continue to be a problem until consistent interfaces emerge, as they did on the web.

While this works against magazines, it’s much less of a problem with ebooks. Books are linear, so navigation controls are much easier to learn. No instructions required, no complex user interface to grapple with.

Another reason could be the more obvious benefits of ebooks over their printed equivalents, including portability, social highlighting, instant dictionary definitions and digital notes.

The magazine experience, on the other hand, is a complex one, and porting this to a digital device is not as straightforward. As Editor at Large of Wired UK Ben Hammersley explains:

‘Print has its own grammar in striking photos, interesting design and typography, whereas for websites there’s video and flash-based content. Content for the iPad is completely different again and I don’t think many publishers have even begun to think about how to use its potential.’

Still, it’s early days for digital magazines and there are some interesting experiments that are sure to lead to better experiences.

I’m currently working with the APA and at our next digital breakfast we’ll be exploring the nature of content for the iPad with some excellent speakers, including Giles Colborne, Managing Director at CX Partners, and Mike Burgess, Head of Digital at Seven Squared, who will be talking about Virgin’s Project magazine on the iPad.

What do you think about magazines on the iPad? How could they be improved? I would love to hear your views in the comments below.